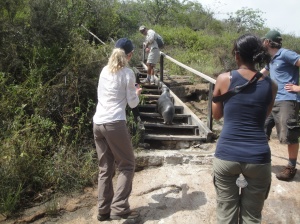 Just as an addendum to our time in Ecuador, local indigenous country women never get grey hair and can also be still fertile up to the age of sixty.

We arrived at Lima airport on Friday night, last off the plane so first off the shuttle bus, we thought we were pretty smart until we rounded the corner and saw that the immigration line was five rows deep…an hour later we were greeted by Luis, an affable sort of guy whose patience was running thin when we finally emerged from the car park thirty five minutes later..Lima airport on a Friday night is complete chaos, the authorities have tried to sort out the problem but the volume of people remains the same and the sound of car horns blaring out on what was otherwise a balmy night, will remain in my mind for some time. Luis gave us a brief lowdown on Lima and also advice on restaurants and bars to visit. He recommended the Mango Bar in Miraflores and said we should definitely try a Pisco Sour, the local drink, his advise included that one drink was definitely all we should have (more about that later!) We approached the Lima Country Club and saw ahead the flashing of cameras, there sitting in the back seat of a black limo was a bride and groom toasting each other, the first of six brides we were to encounter in the next thirty six hours. The Lima Country Club is nowhere near the country, it is approximately fifteen minutes from the centre of the city. An elegant old building, once a private home and now fully restored and one of the top hotels in Lima. We were shown to our room and were grateful to see an enormous bed, suitable I would say for at least four people. Heads down and ready for a good night’s sleep.
The next morning we spent exploring the hotel and came across the same, or was it another bride and groom in full regalia. We then saw written outside the Conservatory dining room the names Olga and Noel, another couple recently married. Olga was dressed in turquoise from head to toe, (in Peru this colour is a symbol of energy) her stunning dress had matching shoes (I am quite sure they were hand made of the same fabric) and her bouquet of pink roses had turquoise ribbons hanging from it. Turquoise is a very popular colour in Peru, and is a national stone. By the time we were collected by Fabiana, our guide for the afternoon, Olga and Noel had been replaced by yet another couple eager to have their photos taken and to get on with the duty of greeting family and friends on this their special day.
Fabiana took us to the centre of the city, a Plaza of yellow buildings, we walked for a while and came to the Convento de San Francisco, this church was consecrated in 1673 and completed in 1774. It has survived many earthquakes and has a library containing over 25,000 antique books. Below the church are the “Catacombs” . Fabiana warned Guy and I that we might find it fairly claustrophobic. It is a series of narrow hallways which contain the bones of over 70,000 burials. The bones that have survived the longest are the “leg” bones although we did see many skulls. These bones were not discovered until 1943 and in fact until a cemetery was built outside the city in 1809 it is thought that the burials took place until up to that time. I have to say that it was all a bit creepy and it felt like an invasion of privacy.
From here we went to the Museo de Oro. This is a private museum which was founded by Miguel Mujica Gallo who died in 2001 aged 92. He was a fabulously wealthy man who has six children, his eldest son now runs the museum. The family money came from mining. Here there is a collection which we found quite overwhelming, there are around 10,000 gold, silver and copper pieces. This private collection created mainly from “tomb robbers”, has caused much controversy in that it is not owned by the government but if Miguel had not rescued these treasures it is thought that many of the items would have gone abroad as so many have already. There is also a collection of Armoury and Weaponry from all around the world. The mummified bodies that were on show gave an incredible insight into the thinking behind “death” and the life thereafter which was truly what was believed. One mother with her two children, one certainly sacrificed and the other probably miscarried, stand out in my mind, all were buried in the foetal position.
From the museum we went briefly to the “Lover’s Park” where there is a very large statue of two lovers kissing, the backdrop is the Pacific Ocean. It is said that on Valentine’s Day the park is full of newly wed couples…there are also many walls imitating the work of Gaudi.
Our next stop was the Mango Café and here was our undoing, we had not one but two Pisco Sours and paid heavily for it next day! 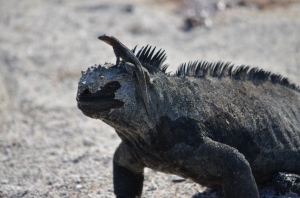 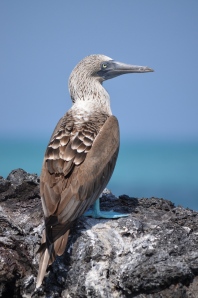 …was on the main deck on the left side of the boat in this picture (i.e., the starboard side) in the very front (just to left of the ladder going to the second deck).