BAHIA has a population close to fourteen million. This state sits on the East coast of Brazil It has the largest coastal area of the country and we have come to the beach to chill out for the last two weeks of our time in South America. They say that “Bahia brings out the best in people” and we have certainly been aware of the friendliness, courtesy and happiness that surround the people who live here. The Portuguese who set out from Lisbon in 1500 with thirteen vessels and 1500 men landed here after forty four days at sea and discovered “Vera Cruz Island” which later went on to be called Brazil. Bahia depicts Brazil, and all around we see why, with five hundred years of history at our feet. We have had an incredible journey up to this point and we have spent sometime in these last few weeks reflecting on it all.

First we go to Trancoso, a small beach community well known for its Quadrado, and 16th century church. In the Quadrado there are many coloured one story houses which today serve as homes, restaurants and shops. This small community over the past few years has become a hideout for many people escaping the northern hemisphere winters, but I see little change since I came here for a weekend in 2006. We are staying at the Villas Trancoso, a small hotel on the beach which has the most interesting breakfasts that we have so far encountered. The owner tries to enourage us to travel from the hotel but we explain to him that we are here to just “chill” and he politely accepts that. We are the only people here so we get a great deal of attention. Things hot up towards the end of our time when preparations get underway for a large wedding party who will take over the entire place for five days!! The beaches are second to none, white sand with a backdrop of no visible property, the law has prevented anyone from building right on the beach so consequently the vista for as far as the eye can see is clear of houses and hotels (of which there are very few anyway.

Our next beach “time” is on the island of Tinhare. The main town being Morro De Sao Paulo. Our flight from Salvador takes twenty minutes. It is a small six seater plane. There are only four of us. The other couple, both Brazilian and in their twenties had decided that the notorious boat ride in bad weather was not for them…..Past experience was the reason that I thought we should fly there also and with the weather taking a turn for the worse, I was very glad that with four of us it meant that there were enough people to make the flight possible. Morro has changed since I was there last but everything that has changed is for the good of the island and its people. The main street is now paved with brick and tastefully done. There is so much rain there in the rainy season that when the streets were just sand (which many of them still are), massive puddles make life very difficult. There are basically no cars permitted, so the only transport is either by wheelbarrow (all taxis are wheelbarrows) mule, tractor or (and I only saw two) buses. There are four main beaches and each beach is simply called, one, two, three or four. Beach two is the most lively and we are staying there. The view from our room is straight to the beach and now that they have a wooden pathway outside all the hotels, restaurants etc. on beach two, it attracts the most people. Music is playing all the time and it is all traditional Brazilian, no pop or disco sounds are heard. We enjoyed three days of sun before the rain came and when it comes there is no warning, it is tropical and down it pours in sheets, for hours. We enjoyed our time there and again found the people so friendly, warm and inviting. We fly back to Salvador this time we are the only passengers….what a way to go!

Then to Salvador da Bahia. Salvador is the third Brazilian capital and it is home for the largest black population outside Africa. Three races together Indian, African and White synthesize Brazil today. It has no less than 365 churches! I did voluntary work here in 2006 and did not expect to return but it was on our route back to Europe (tomorrow we fly to Lisbon) and so I thought it would be interesting to show Guy places like Pelourinho and the lower city. Pelourinho, a UNESCO site has been undergoing restoration since 1992 and it still has a long way to go.
It has the largest baroque collection outside Europe. The famous “Olodum” was born here and as is the case on Tuesday nights many of the new students take to the streets and play the drums followed by people dancing, there is a great sense of joy and appreciation all around. We are staying at the Convento do Carmo in Pelourinho a former convent and now fully restored as a hotel. It is huge and restored in a way that the original character has not been destroyed. Guy keeps reminding me that it was home to many a “nun” who probably felt imprisoned by its huge thick walls…..somehow I would rather not think about that but just enjoy the space and tranquility and architecture that it offers! We will be here three days and then move on to the next leg of our journey. Ahead we have routes planned to Austria, Italy, Croatia, Greece, Turkey, France, Germany, Scandinavia and the UK and anywhere else that we might want to go……how lucky we are! 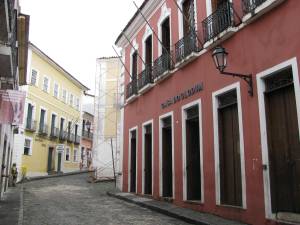 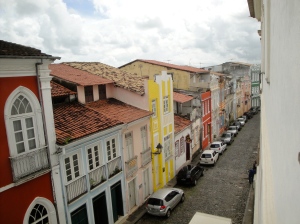 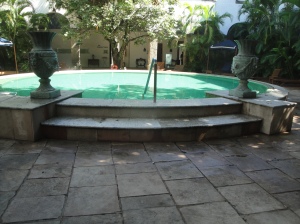 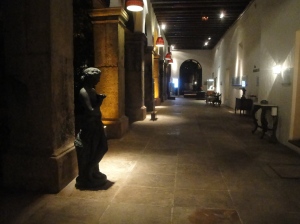